If you haven’t seen last night’s Question Time, you probably should. You can find it all on YouTube (UK residents, look on BBC iPlayer). Nick Griffin (whose ancestors were apparently travellers, not that that matters), was shown to be not the cunning demagogue that some feared, but rather the slippery, dissembling, sweaty fascist you and I already knew he was. I don’t think the BNP deserves a platform on primetime TV but I imagine the BBC got good viewing figures.

Over at Vice, there’s a bit of video about the Welsh Defence League marching in Swansea. I can’t embed the video, but you can see it here. The WDL/EDL are the street thugs of the BNP. Performing Nazi salutes, shouting racial threats and promising violence, these people are the real face of the BNP’s politics.

As a side note, it’s nice to see Andrew Fitton, SWP and Unite Against Fascism organiser in Swansea, on the video. I haven’t really thought much about Andrew or any of the other SWP activists since I left Swansea more than seven years ago… but seeing him on that video reminds me of both the joy of discussing and marching for something I believed in, and the bitter-sweet frustration that comes from being involved in a small political group. Seeing Swansea UAF on video reminds me that I need to get back to that kind of direct action right now.

So thanks, Vice, for that.

If you haven’t seen it, this is the ad that Charlie Brooker wrote about in his column on Monday. It has to be the worst conceived, most amateurish political ad I’ve ever seen done in earnest. Oh, and “Don’t turn it off!” is such a David Brent way of starting it (not that he’d have ever voted for them, seeing as he wanted the world to be ‘colour blind’). The comments on the YouTube page are also well worth a look – they’re mostly mocking. Sadly, we can no longer leave comments… funny, that.

Contrast that rubbish with the SWP’s latest poster campaign and we see that the left are still far better at humour, taste and design. 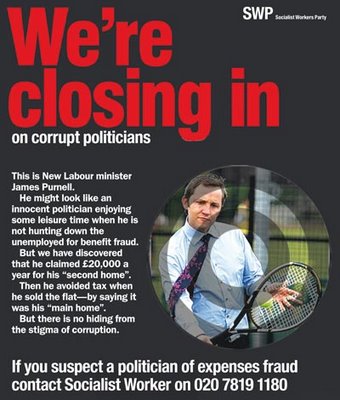 I mentioned in a post some time ago that I was disappointed that a video with a bit of swearing in (Nick’s epic bowling movie, for example) could be banned from YouTube.com whereas videos from the BNP which solicited almost explicitly racist comments are left untouched. This situation is symptomatic of a problem with the far-right in online communities: they’re far better organised than the left wing are. So, for example, a video during which a Socialist party member reads from a selection of BNP literature and describes them as racist is met with responses like ” Can you explain the non-stop HATE I see every day in the eyes of black men…?”.

Later, the comments devolve into opposing sides referring to eachother as “Moron” and later, “C*nt”. Intriguingly, this last word is banned from videos on YouTube but not from the comments people leave. Check out the abuse this user gets on his profile page. Interestingly, I only stumbled upon that user’s profile because he, in turn, had been sending me offensive and threatening messages because he thought I’d posted a video spoofing homophobic reggae ‘star’, Buju Banton. In turn, a video of fellow reggae performer Shabba Ranks saying the bible supports Buju’s positon features the comment “Heah i aint famous so f*ck it, all queers should be shot dead it aint right and should be dealt with by aggression and plenty of it cut there cocks off if they cant use it properly f*ckin sick bastards.. [sic]”.

I recognise that in the US, where YouTube is registered, there exists a stronger belief in freedom of expression, whatever offence is caused. And yet, YouTube’s Community Guidelines state “We encourage free speech and defend everyone’s right to express unpopular points of view. But we don’t permit hate speech which contains slurs or the malicious use of stereotypes intended to attack or demean a particular gender, sexual orientation, race, religion, or nationality”. The advice given by YouTube is that if you’re not happy with something, you should flag it as inappropriate and it will be dealt with. I know, however, that this is just not applied to offensive comments.

So what should be done? Some people will say that frankly, freedom of speech should be upheld above all other rights. I disagree when it comes to hate speech as categorised in YouTube’s own rules. YouTube really needs to make more of an effort to moderate debate on its pages. There’s no stopping stupid thugs making unpleasant videos like this but YouTube should be checking the content that gets uploaded to its site.