Today, I’m on strike. As are various media organisations, making it difficult to stay up to date with developments around the country.

Here’s a crowdmap made by Graeme (South of Watford)

And here’s a widget from El País with up to date info.

Last week, Catalonia’s political parties sent their latest signal in their campaign to made it clear that they’re petty, thick and best ignored.

Having achieved a great thing by banning bullfighting over the summer, Catalonia had once again managed to paint itself as an advanced and forward-thinking region. Accusations were made that this was only done to attack allegedly ‘Spanish’ culture, in revenge for the constitutional court deciding to cut Catalonia’s statute of autonomy.

So just as Catalan politicians enjoyed their first taste of a kind of international political capital, they went and fucked it all up by voting to exempt certain cruel ‘Catalan’ bull torturing festivities, including the corre-bou and the bou embolat.

The reason that the parties have exempted these practices from the ban is simple: in some rural communities, these ‘festes’ are still popular. CiU, ERC and the PSC are all desperate to hold onto votes in these communities and so like the disgraceful way they pandered to anti-immigrant fervour by banning burqas, so they are now revealing themselves for the bare-faced hypocrites they are. Only Iniciativa (ICV – the Green-Communist group) voted against the exemption.

Christ, imagine if we were a separate country. We’d be screwed. 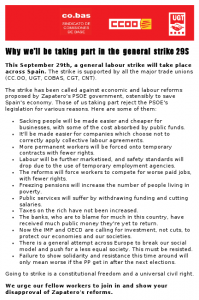 Following on from June’s ‘Some Questions for a Catalan Independentist‘ , here are some questions I’d like to pose to those of you who are opposed to the idea of Catalonia becoming independent. These have been harder to for me to formulate for one simple reason: in a debate such as this one, the onus is really on those proposing change (in this case, the independentists) to explain why the rest of us should go along with their proposal. That said, I do feel that there are some questions which do deserve to be asked of those who oppose independence. From my experience in the real world, their arguments against independence often seem to be the most fallacious of all.

And that’s it for the moment. Let me know if you think I’ve missed out something really glaring. And do feel free to answer some or all of the questions for an independentist too.

I’m a big fan of TV as a cultural medium. A well made TV series can often be much more detailed and consuming than any movie. Seinfeld’s plot arcs are famous, but so – I reckon – should be the BBC’s excellent TV adaptation of Pride and Prejudice (a TV show which has rendered all films of that novel, prior and subsequent, rubbish). Here are some of the shows we’ve been watching recently.

The first time I watched this show, I couldn’t get into it. We watched the pilot, and perhaps I was in a bad mood or something, but it just didn’t take. This year, we tried again. And I’m so glad we did. Arrested Development is one of the best comedies I’ve ever had the pleasure to see. The cast is perfect and the scripts are wonderful. The Bluth family, backbiting and conspiring against each other, is a jewel of TV comedy setups. That Fox cancelled Arrested Development is yet another tragedy in that network’s history. That the writers found numerous ways of mentioning this in season 3 only confirms their wit. Gemma and I will forever have GOB’s chicken dance as a happy, surreal touchstone of great comedy.

Perhaps controversial in content, I grew to love this portrait of advertising executives on Madison Avenue in the 1960s. Yes, it has product placement, is broadly capitalist in its outlook, and sometimes seems to go out of its way to celebrate ‘the good old days’ of chauvinistic extravagance. But Mad Men isn’t uncritical. The pompous, fatuous alcoholism of its title characters is loathsome, and the program makes this clear. What’s more, Mad Men is shot better than any TV show I’ve ever seen. Both because of its perfect direction and immaculate production values, Mad Men is a must see.

This program was described by someone on Popbitch as being a bit like Friends, only where all the characters hate one another and plot against each other constantly. The backbiting (yes, I like that) and unscrupulous behaviour of the characters always leads to their inevitable downfall, often at the hands of an array of recurring enemies.

Dexter is a TV show which received widespread praise among critics and friends alike. However, it’s not actually a very good show at all. The writing team aimed at a serious plot arc, but the episodes themselves are bogged down in character development of the dullest, most pedestrian kind. The acting is often quite terrible, and this goes for the lead as well as almost all of the supporting characters. The main problem is the lead character: he’s a sociopath with whom we’re supposed to somehow bond. I found Ted Bundy in the eponymous movie somehow less hateful than the lead character Dexter. At least Bundy was completely insane. I know that the writers are offering us a challenge: accepting a serial killer as a hero. But, because of the writing and the acting, it never quite works. Which makes it bad.

From the creator of The Wire and Generation Kill, Treme is a story of music and rebirth in post-Katrina New Orleans. Tracing various characters as they attempt to rebuild their lives in the near-ruined city, Treme has as its focus the city’s jazz scene, second line bands and Mardi Gras Chief parades. The writing is excellent, the cast formidable (along with some familiar faces from the Wire, John Goodman and others lend real gravitas to Treme), and the story is uplifting and heartbreaking. But it is the music that makes Treme a practically perfect TV show. From John Boutté’s theme song to the Rebirth Band’s second line tunes (and this is just in the first few minutes of episode 1), Treme is infused with New Orleans music from beginning to end. Celebratory, mournful and tragic in turn, Treme is probably the best TV show I’ve seen since The Wire. It might even be better. Season 2 is on the way. If you watch one TV show this year, make it Treme.