Before I go to Menorca [which, according to my own rules, I should be calling ‘Minorca’, damn it!], there’s just time for a new badPoll. Today’s poll is a really special one, because it’s presented in partnership with a very special guest: 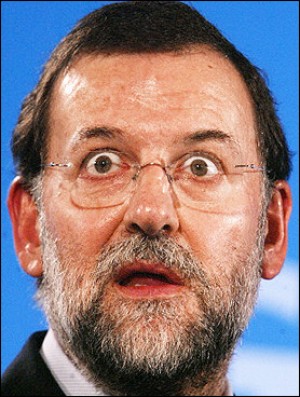 Yes, that’s right: thebadrash.com is very pleased to announce that this badPoll is sponsored by none other than ‘Uncle’ Mariano ‘Wild Eyes’ Rajoy!

And it gets better! Uncle Mariano has agreed to abide by the results of this badPoll, meaning that your votes could make the difference between Una, Grande y Libre and the kind of namby-pamby commie, animal husbanding Catalan-loving hellhole that ZP, the judiciary (some of the time) and their Barça-supporting cronies want.

The question is really simple: Is Bullfighting a vital part of Spanish culture? You might rephrase it by asking: is Catalonia’s decision to ban bullfighting ‘an act of genocide’ (thanks, Jorge ‘morro’ Moragas!)? Or can Spain live without this barbarity celebration of torture killing a cow in public?

As always, you can vote in the sidebar over there >>>

UPDATE: The Catalan parliament has voted in support of removing the exception permitted to bullfighting from its animal cruelty law. Bullfighting has been outlawed here!

Catalonia’s parliament will likely vote today to finally ban bullfighting within Catalonia. This is a decision that has been approached in a very stop-start manner, and which has been under debate for quite some time. I think I’ve made my feelings quite clear about the barbarity that is La Corrida, and I welcome the ban, and hope that it’s eventually extended throughout Spain.

Various parties seem to be trying to make this a question of revenge for Spain’s constitutional court rejecting passages of Catalonia’s statute of autonomy recently. It has nothing to do with that whatsoever. This is about banning a vile celebration of animal torture. Just as the Canary Islands did in 1991, Catalonia will freely make the right decision today.

Incidentally, right-wing PP leader, Mariano Rajoy’s un-rousing speech yesterday, where he said “Just as you can’t force someone to go to a bullfight, so you can’t prohibit them from doing so!” – is one of the stupidest things I’ve ever heard. And I moved here when Aznar was still in power. That statement in particular, could be applied to any activity you like. Try it with “a walk in the park”, “a bank robbery”, “have a carajillo in the morning and then drive your police motorbike”, “spout shite”. These are some of my favourites, but I’m sure you’ll find your own. Bon dia.

It is now more than eight years since I moved to Barcelona province. When I arrived, I was just 21 years old, and next week I’ll celebrate my 30th birthday. A proper adult and everything. Indeed, Catalonia is where I have made a life for myself; it is the country that I now call home.

In the meantime, I’ve learned to love many things about the country in which I’ve made my life. There are some things which just have to do with growing up, like food: I wasn’t the biggest fan of mushrooms or olives before I moved here. Now I love rovellons, and have respect for the noble arbequina (among many others). I’ll say things like “This coffee tastes burnt,” and do things like pour olive oil on my bread or chill red wine.

In short, I’m now a dago, or catalufo, if you prefer. It’s a great feeling.

I’m more than a little tired of hearing Spanish friends refer to passers by as ‘el negro’, ‘un moro’ ‘la sudaca’ or ‘un paki’, usually followed by an unwanted explanation of why political correctness is just a stupid English obsession. Similarly, it just doesn’t fucking wash when you say “It’s not racist, it’s a joke” as you do your hilarious ‘slitty eyed’ Chinese impression.

And the truth is, I think you really know this already. It’s suggested by the way you feel the need to endlessly justify your racist jokes and your clumsy stereotypes. Just stop it.

I’ve adopted a new design. It’s not perfect, but neither was the last one (which I think this emulates fairly well). The new look was necessary because the previous theme I was using doesn’t support various features of the newer versions of WordPress.

There are still things to be fixed, but I’m pretty much finished tweaking the design for now. Please let me know if there’s anything particularly glaring that you don’t like about it.

A good example of how shoddy journalism sucks. Yawnville style.

Why I’m not walking down Passeig de Gràcia: I won’t march when the PSOE/PSC/José Montilla lead the demonstration. They are the problem. Not the solution.

This week, the question is simpler than it sounds: do you think Spain’s constitutional court was right in cutting various passages from Catalonia’s new statute of autonomy, approved by referendum some years ago?