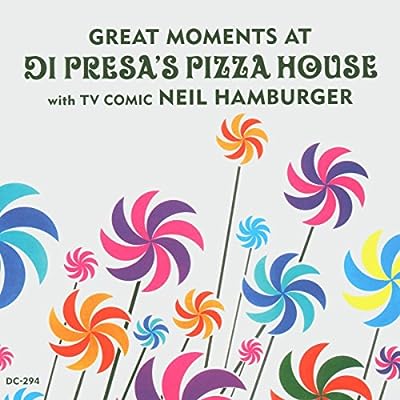 Combining heart-breaking tragedy and side-splitting comedy is a hallmark of great writing. Neil Hamburger’s album from last year, Great Moments At Di Presa’s Pizza House has enough of both to make it a classic barely a year after it was released upon an unsuspecting world.

Charting Hamburger’s early days as he starts gigging in a pizza parlour, this album manages also to tell the tale of an America which was; pizza houses with pipe organs, pizza houses with AA meetings-cum-poetry recitals, pizza houses with wet t-shirt competitions that got out of hand. And there, in the midst of it all, our only remaining link with those great old days: Neil Hamburger himself.

Hamburger’s material in this album is often directed at celebrity and is often far more up-to-date than in much of his other work. Launching into his set with three quick jabs against Mick Jagger, Madonna and Robin Williams, Hamburger stakes his claim as the last of the great comics: the man who, despite compromising massively with his style and material, never sold out. Of course, he was never given the opportunity to sell out but that doesn’t really mean anything.

Along the way, we meet a host of other characters, new and old, who played a role in the life of both Di Presa’s Pizza House and Neil Hamburger. Such as Leroy Brothers, another comic hired by the pizza house – this time just when controversial ‘afro-American’ stand-up was becoming mainstream. His muddled racial stereotypes and clumsy, awkward style – all in hock ‘black man’ accent is rudely interrupted by a customer denouncing him as the white son of a lawyer for Kraft Foods.

Hamburger, though, is on ebullient form. At points, he refers to the proprietors of Di Presa’s Pizza House as ‘pricks’, and asks a critic of his last two albums to ‘go fuck yourself’. He insists that the last few albums were poor because of the messy divorce he was going through at the time. For more information on this, check out ‘Left For Dead In Malaysia’ where Neil, realising that no one in the Kuala Lumpur karaoke bar can understand him, spends several minutes in morose discussion of his wife, divorce and suicide.

Great Moments At Di Presa’s Pizza House is a tour-de-force, and is highly recommended either as an introduction to Hamburger or to complete your collection.  1 out of 1

To find out more about America’s Funnyman, Neil Hamburger try this unofficial homepage.