If you’ve been wondering what I’ve been up to recently, and let’s face it: you haven’t but it works as an opening gambit; I’ve been fairly busy with a pleasantly productive period of work in the real world. My new-ish desk offers me a view over the city including the Sagrada Familia, Montjuic, the Forum, that hill where they have the Parc Güell and the Mediterranean sea (pollution permitting). Well, I’ve been doing that and tweeting.

I make no apology for using Twitter. I do apologise for dissing it in the first place, because it can at times be great. Much of my time on Twitter has been spent obsessively checking my ‘hetero rating‘ on a website affiliated to Stockholm Pride, an event that kicks off next week. This fun little toy works by analysing one’s tweets and every time I check it, I get a rating of ‘42% hetero’. Apparently, this is because I use the words ‘Barcelona’, ‘coming out’, ‘opera’, ‘available’ and ‘ass’ in my tweets. These words make me a ‘hybrid hetero’ and lend support to the argument for ‘an extra orientation’. Sounds fine to me, except for the words selected that indicate my degree of hetero-ness. 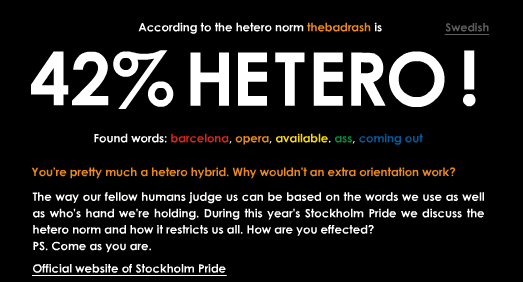 Barcelona has long been gay-friendly and the unofficial Gayxample district contains plenty of hotels and bars which cater mainly to the gay market. But it’s not an exclusively gay city. Indeed, I’d say it’s probably predominantly not gay. But I may be wrong about that. Opera, as well as being often incredibly camp musical theatre, is the name of a web browser. Ass? Well… I can’t really explain that. I may have been calling someone a loser ass or something. Or perhaps I was talking about ass, but that might possibly have been be hetero ass.

I shall spend the next few weeks tying to increase my hetero rating. I’ll use manly terms like ‘muscles’, ‘bear’ and ‘trade’. That should fix it.

Oh, and we also went to Cotlliure in Northern Catalonia (France as the nationalists would have it), a couple of weeks back. It’s a lovely place, but I recommend visiting out of season if possible. Photos here.