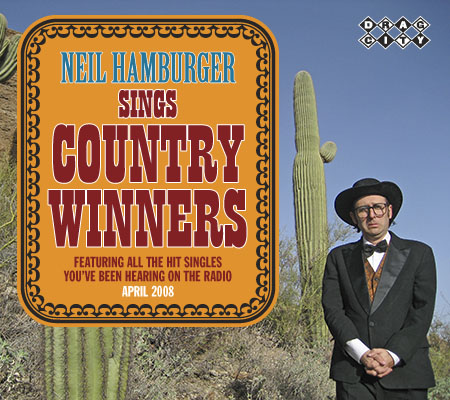 I’m a big fan of country music. Not the real, commercial 1990s shit, but the fake and made-up 60s and 70s country produced by Gram Parsons and the Rolling Stones. So I wasn’t disappointed to see that Neil Hamburger’s new album, Neil Hamburger Sings Country Winners (SCW from now on) is just what the title suggests: a collection of country songs, sung by one of America’s greatest comedians.

The songs range from The Recycle Bin, an expletive-ridden piece about recycling and failure (more on this later), to a new interpretation of Hamburger’s popular classic, Zipper Lips. But pervading the entire album is a sense of sadness, depression and bizarrely, jubilation.

Naturally, the lyrics are very funny. In Please Ask That Clown To Stop Crying, Hamburger recounts an episode where he witnessed a children’s party in a local park, ruined by a clown who, instead of entertaining the kids, slumps at the table with ‘a cigarette and a shot of gin’ and cries. The clown, of course, is Neil Hamburger. Meanwhile, in Jug Town, we hear of the solace a man can find in ‘a jug of wine’ down in Jug Town. At Least I Was Paid is a tribute to Hamburger himself, who has chosen to work as a hugely unpopular comedian sometimes paid in casino chips – but at least that’s payment.

For me. the big hit on the album is Recylce Bin, a song that combines a forceful rebuke to those who put unrecyclable items in recycling bins (‘You pricks, you fucking pricks’) with a heartbreaking ode to the things that just can’t be recylced (‘Not everything goes into a recycle in: a shattered dream, a divorce? Those are just waste’).

Neil Hamburger Sings Country Winners probably started its life as a joke. But the final product will immediately be rated as some of Neil Hamburder’s best work. I’m obviously a fan and I think it’s fair to say that his material will mainly appeal to drink-soaked, single, depressed, male fans of sick humour (which obviously excludes me: I’m married). That said, I really believe that with a bit of effort, anyone who enjoys really good comedy could learn to love Neil Hamburger. The ‘Great Moments At Di Presa’s Pizza House‘ as well as the numerous ‘live’ albums, along with the original ‘Great Phone Calls’ are all indicative of a great talent which will probably only spoil if it gets too much recognition.

Out now on Drag City Inc.

And here’s a video of Jug Town: