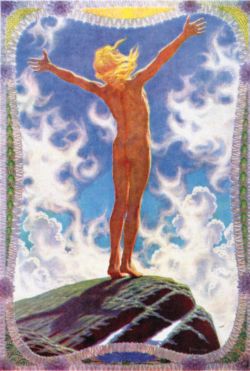 I’ve been meaning to post a link to this article for some time now. It tells the story of the development of hippie philosophy and is a good starting point if you want to investigate the conceptual similarities between Nazism and the hippies. Much of the story takes place in Ascona, Switzerland, which was the epicentre of the ‘back to nature’ movement, popular with Hermann Hesse and Carl Jung among others.

The guiding philosophy at Ascona was a mixture of “nature mysticism, sun worship, theosophy,” and vegetarianism, which together with various other ideas constituted the idea of Lebensreform (life-reform). These concepts were also bound-up in two apparently opposing political positions: Nazism and Ghandism. Ascona looked like something many of us would recognise from various 1970s films and documentaries:

The beautiful natural setting inspired urban people to sunbathe in the nude, sleep outdoors, hike, swim and fast. This village quickly developed a universal reputation as a health center.

Hermann Hesse was excited when he saw four long-haired men with sandals walk through his village on their way to Ascona. He followed them, settled in and then took a nature cure for his alcoholism. The year was 1907.

It was from Ascona that people like Dr. Carl Schultz and the wonderfully named Dr. Benedict Lust exported the concepts of Lebensreform and Naturopathy to the United States and California in particular.

In 1906 Bill Pester first set foot on American soil having left Saxony, Germany that same year at age 19 to avoid military service. With his long hair, beard and lebensreform background he wasted no time in heading to California to begin his new life.

He settled in majestic Palm Canyon in the San Jacinto Mountains near Palm Springs California and built himself a palm hut by the flowing stream and palm grove.

Bill spent his time exploring the desert canyons, caves and waterfalls, but was also an avid reader and writer. He earned some of his living making walking sticks from palm blossom stalks, selling postcards with lebensreform health tips, and charging people 10 cents to look through his telescope while he gave lectures on astronomy.

He made his own sandals, had a wonderful collection of Indian pottery and artefacts, played slide guitar, lived on raw fruits and vegetables and managed to spend most of his time naked under the California sunshine.

The many photos of Pester clearly reveal the strong link between the 19th century German reformers and the flower children of the 1960’s…long hair and beards, bare feet or sandals, guitars, love of nature, draft dodger, living simple and an aversion to rigid political structure. Undoubtedly Bill Pester introduced a new human type to California and was a mentor for many of the American Nature Boys.

But Ascona wasn’t merely the birthplace of the ‘perennial counter-culture’ which informed the hippies of the 1960s and 1970s. It was also a centre for the development of a modern, Germanic art form which was closely linked to concepts of race and nation (as well as nature). Ascona was, to all intents and purposes, the birthplace of modern dance. Rudolf von Laban (along with Mary Wigman), closely connected to the Lebensreform idea, established his ‘School for Art’ at Ascona, and it was here that he developed his notation which was an attempt to remove the formality of classical ballet and replace it with an almost tribal expressionism, a freedom linked directly to the concepts of Lebensreform.

Modern dance went on to become “an art form that went on to build the National Socialist myth,” (Laure Guilbert). That last link is to a review for Guilbert’s book, Danser avec le IIIème Reich, which I haven’t had the opportunity to read yet. In the book, Guilbert makes the point that modern dance has, for some time, managed to expunge any idea of a connection with Nazism from its history. The truth is that,

Laban et al. were entwined with the mind-set from which the NSDAP itself issued.

Leading figures of the Lebensreform movement went on to design and choreograph the ritualistic dance of the 1936 Berlin Olympics, all captured on film by Leni Reifenstahl – a former student of Ascona’s Mary Wigman.

Now, my intention in drawing these threads together is not to imply that all hippies are Nazis. That argument doesn’t stand up. But it is interesting to see how the the ‘Summer of Love’ in San Francisco was partly influenced by cultural movements seemingly a million miles away from the beliefs of most who would call themselves “hippies”.

The Asconan Idea in Politics

7 thoughts on “Laban, Ascona, Nazism and the hippies”