The most recent allegations made in the PP corruption case, first over last weekend in El Mundo and today in court, have been explosive. Luís Bárcenas, having denied that he wrote the alleged ‘B accounting’ books of the PP, today admitted that they were his work. He deposited digital copies of – apparently – all the documents related to the case with the judge. He went on to claim that Rajoy and party secretary Maria Dolores de Cospedal did receive cash payments from his slush fund in  2008, 2009 and 2010, totalling €90,000.

Rajoy, in a dodgy press conference tactic, took a question from the friendly ABC newspaper instead of from El Mundo, and read a prepared statement. He won’t resign. Of course he won’t. And nobody was expecting that he would. But the PSOE has again called for his immediate resignation. They’re also trying to get enough cross-party support for a censure motion against Rajoy in parliament. I can’t see how this would achieve anything but a symbolic defeat because the PP has an absolute majority.

If Rajoy has one political instinct, it is to ignore everything and carry on regardless. While often seen as burying his head in the sand, El Jueves had a better metaphor for the man today. 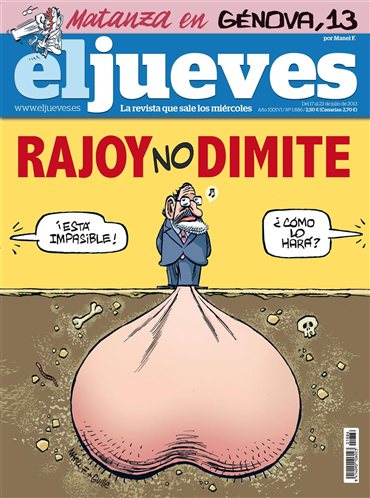 But stepping back from the excitement of what seem to be such clear grounds for Rajoy’s resignation, we’re faced with two problems. The first is the source of all this information: Luís Bárcenas. The problem with him is that he’s clearly – evidently – a very dishonest man. So why should we trust him now when half of what he denied previously he now admits? The same goes for El Mundo and its crusading editor, Pedro J. Ramírez. El Mundo has a decent reputation for exposing some big corruption cases. But Pedro J.R. is a PP sectarian who loathes Rajoy. He also pushed bizarre conspiracy theories about the 11M bombings for years, and backed them up with some alleged documentary evidence.

So should we trust Bárcenas and El Mundo this time? Well, the question is whether we trust the documentary evidence that Bárcenas has apparently submitted to the court today. He now says it is a full secondary accounting system which he maintained (why? self preservation?) as he handed over millions of Euros in unregistered donations to party officials over 20 years. Trusting this evidence is key. So why do I?

Well, because two PP officials have already admitted to receiving these ‘extra payments’. Eugenio Nasarre and Pío García Escudero both made this admission in May. To now say that the documents that Bárcenas has produced are false would suggest a conspiracy at a much higher level, including various PP officials in an incredibly elaborate anti-Rajoy plot. No, the more believable version is that Bárcenas, realising he has no protection whatsoever from the party he gave so many years to, has  decided to sink them all.

And this leads us to the second problem. Assuming we do trust the ledger books, what other corroborating evidence is there? It will be easy for Rajoy, Cospedal et al to insist that whatever the court says, the documents are false. They could string this case out for decades. So we need some evidence other than the ledgers and it’s still not clear that Bárcenas has this. The PP has talked about releasing tax statements for all its MPs to prove their immaculate record. This, naturally, is insulting. If they want us to believe that their tax records prove that they didn’t get envelopes full of cash, they’re sorely mistaken.

So this is where we are: what seems to be clear incrimination for the head of Spain’s government, and no solution in sight. We can only hope that Bárcenas has something else hidden under his blanket.