This billboard is on my walk from the bus to work. It’s advertising the ‘This is war! Robert Capa at work’ photographic exhibition which has come to Barcelona after a successful stint in London. The image used is, of course, Loyalist Militiaman at the Moment of Death – a fine photograph which most experts consider to have been posed (not that this makes any real difference: all images are created, one way or  another, and this is a particularly good image).

Attached to the billboard is an interesting statement from persons unknown, pointing out that Capa’s great work was staged, and then continuing for lines and lines and lines without really saying anything that makes sense. Is this madness?

One other thing worth noting: hampones is a synonym of ladrones, I’m told. It’s a new one on me. 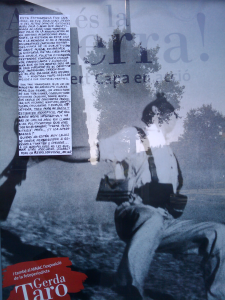 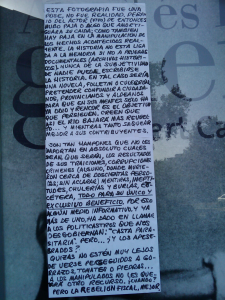 The Olympic torch made a pretty pathetic tour through London today, beset at first by snow and wind, and later by numerous pro-Tibet campaigners intent on bringing their independentist protest to the fore again.

I was hoping that the torch would be fucked with at some point, because the relay is just another side of Britain’s craven pursuit of China’s acceptance. Because of 2012 the torch had to visit London, but at no point has the UK government spoken out about the violent crackdown taking place in what should be a free Tibet.

The most striking quote of the day for me came from the Chinese Olympic Committee representative, who said something along the lines of “It’s sad that people have to hijack the Olympics as a legitimate space for protest”. He went on to explain that while protest should be allowed (yeah, right!), the Olympics are a sporting event, not a political one.

Sorry but that just doesn’t wash. If there is any ‘non-political’ event as political as the Olympic Games, I’d like to know. I’m sick of committee organisers, politicians and police ‘advising’ on the best way to protest. Their suggestions inevitably involve meeting in some park, well away from TV cameras. Yeah, perhaps we could just do it in a labour camp. Actually, the torch relay is about the most suitable target for protest that I can think about at the moment.

Despite all the talk about Islamist terrorism, I’m still convinced that the number one threat that worries governments everywhere is organisation of labour and mass protest. We should continue our protests, illegal if need be, so that governments can’t sit pretty and pretend there is no opposition.

We had a wonderful weekend in England. London is a fantastic city where I’d like to spend more time. But our departure from Stansted airport did much to cement  certain views I’ve held about air travel for some time now.

Modern air travel is cheap and quick. It also used to be fairly simple but in the last year or so, it has become an increasingly complicated way of travelling. The trouble started with check-in. We joined the queue for our flight shortly after check-in opened. We spent about an hour and a half queueing because of the ineptitude of the woman at the easyJet desk. She was phenomenally slow and left her post for nearly half an hour after claiming that a passenger with dark skin didn’t have the correct documentation. His Spanish passport was eventually, grudgingly accepted and the queue continued to shuffle on at the rate of one passenger served every five minutes.

A sign by the check-in desk warned passengers to allow at least 40 minutes to clear security – making clear that the onus is on the passenger to make sure that (s)he gets to the gate on time. In this case, though we had joined the queue as it began, we cleared security with about 10 minutes to spare. At least five passengers toward the end of the queue checked in but were then delayed in the security check phase. They were kicked off the flight and the flight’s captain gave us a patronising lecture about leaving enough time to get onto the plane. Perhaps he didn’t know that the five passengers whose luggage had to be removed from the flight were delayed because of one of his own colleague’s ineptitude.

Next, we approached the security check. This is the biggest recent change to modern air travel. Apparently, current rules (introduced in the wake of various terrorist attacks and attempts), insist that every passenger be put through a series of humiliating trials which test whether they’re a terrorist or not. Herded like cattle on their way to the slaughterhouse (or at the very least, the dipping tank), passengers wait in line until shouted at to proceed. Queues appear and disappear as stewards marshall people this way and that like shepherds call sheep. Belts must be removed, jumpers and jackets too. Personal possessions are laid out for all to see in black metal trays for the x-ray.

Next, we are forced to walk guiltily through a metal detector so inefficient that it failed to detect my wedding ring, 2lbs of coins and bulky metal watch which I had elected not to put through the x-ray. The girl in front of me had three bottles of sun cream which were confiscated, obviously because they might have been used for the production of high explosive. After the indignity of dressing myself again in public, I was herded down the next roped-off passageway only to be told to remove my shoes. By this point, I was getting really annoyed. “For Christ’s sake!”, I said as I pulled my trainers off – all the while being told by the woman at the shoe checking desk that I should ‘move out of the way’. This woman obviously noticed my irritation and said to me in a very obviously challenging way, “You seem very angry, sir”.

That short sentence made it clear that the exhibition of emotion of any sort was suspicious and deserved being challenged. I have no doubt whatsoever that if I had remonstrated with her over that fact that only half of the passengers were being screened in this way (the rest were allowed to just walk straight past), I would have been questioned – and probably by one of the police officers armed with huge semi-automatic rifles.

My problem here is not with security per se. I’m aware that there’s a small number of people out there who want to blow aeroplanes up. I’m also aware, however, that 50% of passengers could just walk through the shoe-checking phase. That I carried loads of metal through the metal detector without it noticing. That I could buy a tennis racket or bottle after security which could realistically be used as a weapon on an aeroplane. That it’s by no means inconceivable that a terrorist network could infiltrate airport shops and make sure that a bottle of water, perfume or shampoo that actually contained the ingredients for explosive were placed on shelves for the right person to buy. In short, I don’t believe that the security in modern airports is particularly effective. It still contains multiple holes which could easily be exploited by a committed terrorist cell.

In truth, I believe that these security checks we all have to undergo are part of a campaign of psychological warfare, the object of which is not to protect us but to cow us. The series of controls act more than anything else as steps in a process of dehumanisation and humiliation which never fail to conjure up the feeling of the emotions we might experience as we queue for access to the camps.

I’ve just discovered that Spain is the world’s third largest producer of wine. Behind France and Italy (I must admit that I can’t remember the time I last tried a glass of Italian), Spain produced nearly four million tonnes of wine in 2005. I suppose that it makes sense: from the ubiquitous Rioja, through Cava to the Valencian fare sold for four pounds a bottle in England, almost every region in Spain produces its own variety of God’s greatest gift. Personally, I’m a great fan of Priorat. The Catalan county which gives Priorat its name has a minuscule population of fewer than 10,000. And yet it manages to produce a wine whose quality and richness is even now being ‘discovered’ by the bodegas of New York City and London. Read more about Spanish and Portuguese wine at Catavino.

Speaking of wine, Gemma and I watched the film ‘Factotum’ tonight. An adaptation of one of Charles Bukowski’s semi-autobiographical novels, it tracks the jobs, drinks and women of Henry Chinaski who weaves his way between work and bed and racetrack in the form of Matt Dillon. I hadn’t read Factotum before. I loved Post Office and Ham On Rye and so knew – more or less – what to expect. I wasn’t disappointed. The direction and acting in the film were smart and well adapted to the subject material. I laughed my head off at parts. And it stars Marisa Tomei… always a good sign, right Costanza?

Graeme at South of Watford drew my attention to the mad ravings of a Libertad Digital blogger today. Pio Moa (or Pio Mio, as I call him) wrote a piece yesterday which basically argued for the use of violence to wrest power from the democratically elected socialist government. The justification he offers for starting a new civil war is that the socialists conspired to bring about the Madrid bombings two years ago in order to steal the election which followed days later. Naturally, this theory is totally lacking in evidence but then most crazy conspiracy theories are. It would be easy for me to say that this guy needs to drink either more wine or less wine, depending on his current wine consumption.

Pio, I’d be more worried about the crack if I were you.