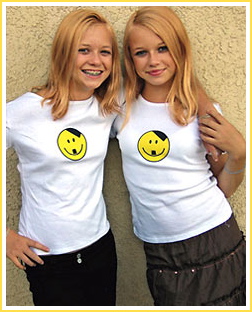 Yesterday, after watching Pirates of the Caribbean 3 (0/1) and Turistas (1/1) we flicked over to More 4 to watch a documentary which was first broadcast in July this year. It concerned Lamb and Lynx Gaede, the teenaged twins who comprise Prussian Blue, a Nazi pop band. I’d heard of Prussian Blue before, probably through the Popbitch message-board, but had never really given them much thought. The documentary offered some insight into these Nazi pop twins and the way they were manipulated and pushed around by their scary mother, April. The twins, aged around 14 or 15 in the film, were clearly? trying to distance themselves somewhat from the White Pride / National Vanguard movements.

The film was naturally full of unpleasant views , mostly espoused by the awful April and her equally unpleasant father. At onepoint, during a small argument about signing CDs for members of the White Pride movement, April could be heard saying to one of her daughters that she should help out for a bit and that “Then you can be as much of a cunt as you like for the rest of the evening”. I hope that Lynx and Lamb find the strength to make the break with the atrocious philosophy forced on them by their mother. She’s one of those annoying people, incidentally, who doesn’t understand language or logic: the thought that she could define racism and that what she promoted wasn’t racism because she didn’t call it that. Sorry, it doesn’t work that way.

Anyway, the documentary is well worth watching. It should be noted that such families are extremely rare in the USA… failure to remember this would be thoroughly anti-American.The reason they don’t make many documentaries about all the other, normal families is that they probably wouldn’t be as interesting as a film about some Nazi Pop Twins.